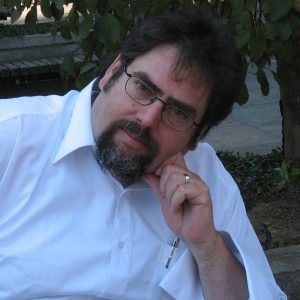 Lawrence M. Schoen holds a Ph.D. in cognitive psychology. He spent ten years as a college professor, exploring human memory and language. This background provides a principal metaphor for his fiction. He currently works as the director of research and analytics for a series of mental health and addiction recovery facilities in Philadelphia.

He’s also one of the world’s foremost authorities on the Klingon language, and since 1992 has championed the exploration and use of this constructed tongue throughout the world. In addition, he’s the publisher behind a speculative fiction small press, Paper Golem, aimed at showcasing up-and-coming new writers as well as providing a market for novellas. And too, he works occasionally as a hypnotherapist specializing in authors’ issues.

In 2007, he was a finalist for the John W. Campbell Award for Best New Writer. He received a Hugo Award nomination for Best Short Story in 2010 and Nebula Award nominations for Best Novella in 2013, 2014, and 2015, and for Best Novel in 2016. Some of his most popular writing deals with the ongoing adventures of a space-faring stage hypnotist named the Amazing Conroy and his animal companion Reggie, an alien buffalito that can eat anything and farts oxygen. His most recent book, Barsk: The Elephants’ Graveyard, won the Cóyotl Award for Best Novel in 2016 and is a very different kind of book, an anthropomorphic SF novel that explores prophecy, intolerance, political betrayal, and a drug that lets you talk to the dead. A sequel is due out next summer.

Lawrence and his wife, Valerie, live just outside Philadelphia in scenic Blue Bell, PA, along with their dog and rooms dedicated to books.

SFContario is proud to support the Prix Aurora Awards presented by the Canadian Science Fiction and Fantasy Association.